How about a mask 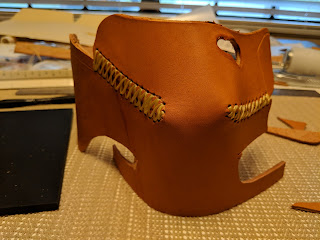 This was supposed to be part of a rifle case. Now it's a mask. 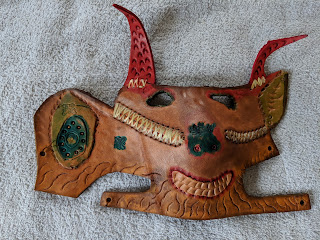 The real goal in this Mask project was to not waste the leather.

Click here for all the photos in this project

Was the case a poor plan or poor idea? Who knows. I was not happy with it and with every cut things got worse, and worse, and worse. So I accepted the failure and moved on. I was able to use most of the leather you see in the image below on the left for other projects. It was just the section on the right that went wrong.

Looking at the failed piece I saw a mask with a single eye. So I added a second eye and other facial features. With the failed project it was the first time I tried doing the two-needle double thread stitch, a stitch used to sew baseballs. I want to remember what I learned here and salvage the leather.

On the left side, the stitches are a bit farther apart. For a hollow project, this made it harder to keep the leather, lined up edge to edge. I also started sewing from the closed end. This made it harder as well.

On the right side, the stitches are closer to the edge. As you can see from the image above (top right) I punched the holes first the ones I liked best (right side of the mask) I eyeballed the distance from the edge for the holes. For the ones I don't love I used a special tool that was adjusted farther from the edge. I was lazy, I could have readjusted the tool, but I also wanted to see how it would turn out. The stitching is not where the original project failed. It was a design flaw on my part or unrealistic goals. For this mask project, the two sides being stitched differently is actually good.

Anyway, on the second stitch on the right side, I also started on the open end. I feel for this made it easier to stitch, but I had access to both sides (inside and outside) of the mask.
Labels: Leather